Earlier this month I read a Variety article about the last hundred years of horror films. It featured the usual suspects, but I had the nagging sense that I was missing some things about which I had vague ideas. So, naturally, I popped the films and their dates into Excel and quickly learned which of my vague ideas were on point, which were off-base.

In the “on point” camp, I’ve seen more recent horror films than older ones. No big surprise, though I was surprised to see how dramatic the shift is on the seen/unseen axis when it comes to films made since I was born. Likewise, while I like to think of myself as an “old horror movies” guy, apparently I’ve been a Universal Horror guy first, “old horror movies” second, 1920s horror dead last.

In the “off-base” camp, I’ve seen less Asian horror than I thought. When I started going down the list, I realized that my vague idea that I “hadn’t seen too many Asian horror films” could be more accurately described as “haven’t seen more than a couple of the biggest.”

In the “huh” camp, I apparently don’t watch horror movies much during times of serious stress or crisis. Not just when someone close to me dies, but at other life or job stress points. Sometimes I go back and rewatch the biggies of the period, but other times not.

If all of this sounds like excessive navel gazing for someone who doesn’t really write that much about horror films, you’re not entirely wrong. In the last couple years, though, I’ve been writing more horror or horror-adjacent nonfiction, as well as thinking about movies. (I had an essay planned for a volume on contemporary horror films, and I withdrew this month, as I’m 2020-blocked, and it’s just not moving quickly enough.)

I’ve read some of the standard horror film/studies books (Clover, Creed, Carroll, etc.), which, if you’ve made it this far, you probably have as well. Some of the more recent work I’ve enjoyed has included…

I’m also a reader of various horror stories and novels that take film as their subject, whether Gemma Files’ Experimental Film or Stephen Graham Jones’ The Last Final Girl. I’ve contributed a story or two to the genre as well, including my “There Has Never Been Anyone Here” in Nightscript IV.

Do you have a list of “must-see” horror films? One you go back to pick new watching from? A favorite film book you use to guide your watching? Feel free to drop it in the comments. In addition to the titles and projects mentioned above, I love The Scarecrow Video Movie Guide.

I’ll close with with a still from a 1997 film I watched yesterday that did not make Variety‘s list… but which was a lot of fun.

This autumn I have a new story out in Of Gods and Globes 2: “The Touch of Lethe.” It’s an odd piece I wrote after attending Necronomicon in Providence a few years ago, somewhere between SF and weird fiction. It’s about the closest I’ll probably ever come to a Twilight Zone story, but it seemed to fit the bill for Lancelot Schaubert’s cosmic anthology. Check it out!

Looking for some dark fiction this weekend? Check out Noir At The Bar Richmond, Saturday at 8PM Eastern. 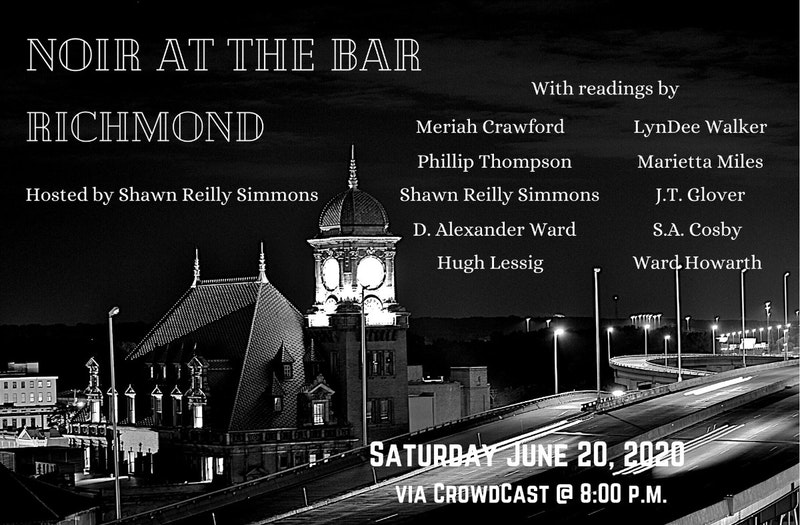 Are you surviving quarantine? Are you over sourdough and jigsaw puzzles? Climbing the walls? Then tune in Saturday night, June 20, 8:00 p.m. Eastern, for a virtual reading: Noir at the Bar Richmond. Come for the escape from shelter-in-place orders, stay for the noir, crime, and horror readings!Who’s reading?

Come check it out at https://www.crowdcast.io/e/richmond-virtual-noir-at-the-bar/register