For any RVA-ns, or Richmond-adjacent folks, this Sunday (February 18th) I’ll be participating in a group reading with a bunch of local authors. It’s going to be noir and broken hearts, and it starts at 7:00 p.m. at McCormack’s Irish Pub.

This year I’ve put up “out for the summer” signs on Twitter, Facebook, etc. I have a bunch of projects under way that have external or internal deadlines over the next few months, and the distraction would have been too much. I have plans to return in the fall, but it is shocking how much calmer and pleasant I am finding life without social media waggling interesting, heartbreaking, or infuriating things in my face. My third autobiography will be entitled A Life Without Clickbait.

Aside from checking on the haps at places like LitHub or AL Daily , I’ve been listening to podcasts when I’m not writing or reading. This includes most recently United Nations of Horror‘s Hellraiser Special, and This Is Horror‘s two-part interview with V.H. Leslie. The Leslie interview was thought-provoking, with some interesting overlap for me with a Fountain Bookstore event last month featuring two publishing professionals, one of whom is the Editor in Chief of Europa Editions, which publishes famed spotlight-shunner Elena Ferrante. Time away from the hurly-burly, it seems, has merits. I picked up Leslie’s Skein and Bone a while back, and I hope to read it this summer.

I’m also excited to be guest author this summer at two Richmond Young Writers camps led by Julie Geen. One is the already-full Dark Worlds camp for ages 12-14. The other is Halloween in August, for ages 15-17. Details on that, if you or a 15-17-year-old you know might be interested…

Is every day Halloween for you? This is for those of us who love the darker genres, like horror, dystopia and science fiction.  We’ll fill our notebooks without worst nightmares, alien abductions, perhaps an apocalypse or two. Expect discussions on macabre topics and an exploration of why we enjoy the dark side. We will make each other uneasy and have a great time doing it. 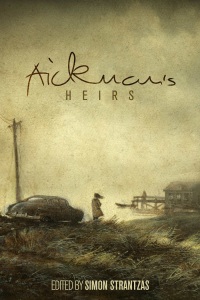 Aickman’s Heirs [Amazon|B&N|Publisher] is a new anthology from Undertow Publications, edited by Simon Strantzas, composed of stories written in the shadow of Robert Aickman (1914-1981). Aickman was an award-winning author of supernatural fiction, referring to his tales as “strange stories,” a moniker which has stuck due to his work’s singular character. He hasn’t been as high-flying as many other authors in terms of public citation of his influence, though that’s changed in recent years with the current wave of weird fiction, much of which quite directly engages with the tradition. In the case of Aickman, that means subtle and sometimes inscrutable tales of people’s experiences with perhaps-supernatural forces. As multiple people commented in one way or another at last year’s World Fantasy Convention, celebrating Aickman’s centennial,  it’s sometimes difficult to know precisely what has happened in a strange story.

This anthology is a fine window through which to view an Aickman-ish world, and I can honestly say I enjoyed every story in the book.  Some gave me more chills than others, some tugged at my heart more than others, but not a clunker in the bunch. Some of the stories I expected to enjoy based on past experience of the authors’ work: Cisco, Gavin, Langan, Marshall, Mills. Others I enjoyed and look forward to rereading a few years down the road.

One of the remarkable strengths of this anthology is that it held no less than four excellent stories by authors I hadn’t previously read much or at all. This is theoretically one of the virtues of anthologies, but it often isn’t so. If the focus on the theme is too strong, the book features well-themed stories that may be poorly written. If the focus is resolutely commercial, too many “safe” author choices. Finding one really good story in an anthology by a to-me-unknown author I take as a gift… which is why Aickman’s Heirs is surprising. Some of the authors below I’ve met at conventions or seen around online, but their work was new to me.

David Nickle‘s “Camp” is short, lean, and packed with meaning. The climax arrives with a visible cause nodded at, but workings left thoroughly unexplained. This is a story I might point to in future if asked to describe a story with a “mysterious” aspect. I currently own no David Nickle books, which this story suggests is a grave error, to be remedied as soon as is feasible.

Lynda E. Rucker‘s “The Dying Season” delivers tiny shocks all the way along its twisting, suggestive length. Striking, lyrical, and brooding. Shades of Shirley Jackson as well as Aickman, I think, or perhaps Joyce Carol Oates. I cannot imagine not buying her collection after reading this story.

Michael Wehunt‘s “A Discreet Music” shares a certain similarity to “Camp,” which I’ll leave the reader to discover. It was a strange story, but it also smacked of magical realism as much as anything specifically in-genre. Whether it’s more Kelly Link or more Gabriel García Márquez, I cannot quite say, but it’s damn good, and I’ll be on the lookout for more stories from him in the future.

Finally, Nina Allan‘s “A Change of Scene” is something of a slow burn that goes in a different direction from many others in this book. The tale of two old friends reconnecting after a many-years-long gap in their relationship is a sleeper. We follow the two women through conversation and a train ride off to what turns out to be The Strange Little Town. Allan weaves in many elements that typically have a share in the supernatural, but she leaves questions hanging as to the precise nature of the darkness the women find. I’m a sucker for ekphrasis, and this story uses it to killer effect. 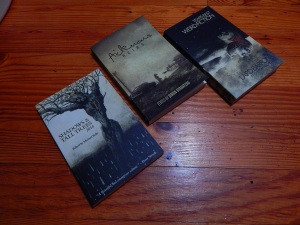 A Bouquet of Undertow

Apart from the fiction, the cover is truly evocative. The artist, Yaroslav Gerzhedovich, appears to work in thin layers with various kinds of supports and media, and the sentiment he conjures fits the book perfectly. It also seems to me to fit in with the overall design of Undertow’s books, which makes the lot a pleasure to consider. His work is of a piece with that of many other artists (Santiago Caruso, Galen Dara, Kris Kuksi, Daniele Serra, etc.) who have amped up their landscape elements or decorative motifs vs. more conventionally character-heavy illustration. A welcome companion to the new golden age of weird fiction.

Aickman’s Heirs was a genuine pleasure, and I’ll happily read more Strantzas-edited anthologies down the road. Fortunately Simon is editing Volume 3 of the Year’s Best Weird Fiction, so there’s something just over the horizon.

This weekend I read an essay by Andrew J. Wilson in Pulp Fiction of the ’20s and ’30s, a volume in the Critical Insights series: “The Last Musketeer: Clark Ashton Smith and the Weird Marriage of Poetry and Pulp.” I read it partly as potential grist for something I’m working on, but also simply because I was curious to read more criticism of Smith, an author of weird fiction and poetry who continues to be read, but who has received little critical attention when compared with the likes of Chandler or Lovecraft. Wilson inserts a quotation from Smith’s “notebook of ideas” that resonates with the thinking of any number of  people in the pulp era, weird fiction writers or otherwise:

The weird tale is an adumbration or foreshadowing of man’s relationship—past, present, and future—to the unknown and infinite, and also an implication of his mental and sensory evolution. Further insight into basic mysteries is only possible through future development of higher faculties than the known senses. Interest in the weird, unknown, and supernormal is a signpost of such development and not merely a psychic residuum from the age of superstition.

Blogging Before the Orthography Standardized

Recently I was approached by Shawna Christos, one of the first members of James River Writers I ever met (2009? 2010?), about participating in the Writing Process Blog Tour, and I agreed to participate. It’s not the kind of blog tour where an author guest posts all over the place about their new book, but rather, a blend of meme and progressive dinner. Tune in next Monday for my answers to the following questions:

2) How does my work differ from others of its genre?

4) How does my writing process work?

Some of my fellow JRW-ites have participated and posted already…

Shawna Christos on self-preservation and sanity as motivations for writing.