The Summer 2015 issue of Goreyesque has dropped, and it includes my flash fiction story, “The Doubtful Wonderland.” If you like Edward Gorey’s work and haven’t seen this journal, I urge you to check it out. I attended the Gorey exhibition in Chicago that sparked the journal, and the story of its birth is an interesting one. As for my story, it’s a reprint that originally appeared back in aught-eight in a now-defunct print journal called The Willows. It’s a nasty little thing, influenced by both The Loathesome Couple and The Gilded Bat. When “The Doubtful Wonderland” was first published, I had this to say:

Our affection for Victoria’s England is passing strange, much of it based on an idealization that blithely ignores the squalor, moralizing, and inflexible class structure. Meanwhile, we smile and wink at its covert bawdiness, the antithesis of the 21st century’s cold parade of silicone and latex. My intent here was to offer a view of our Victorianomania taken to its logical conclusion, wherein little girls are rancid and old men, however kindly-seeming, have hearts of spite. I can only hope that you find yourself slightly revolted. 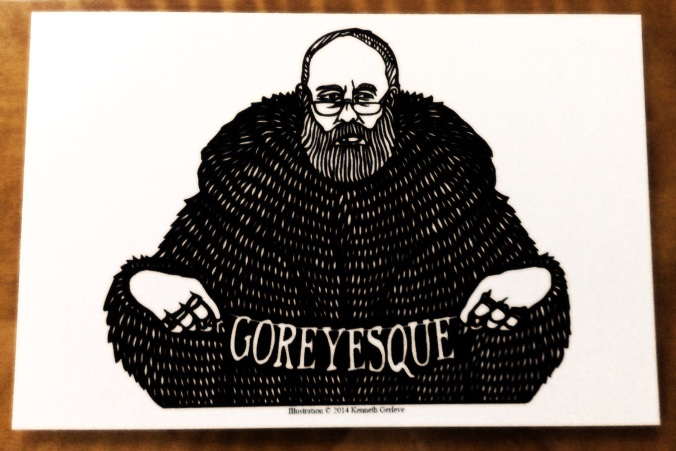 Promo card for Goreyesque at AWP