What’s new, pussycat? A couple of largely news-free writing months for me. As I expected a while back, I’ve spent a lot of time over the last couple months raising my voice, doing my best to help hold power accountable, etc., etc. No glory in it, but when your elected representatives don’t just disagree with you or ignore you, but actually lie to the media regularly about your existence… you have to speak up. 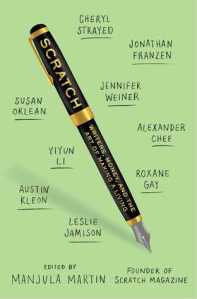 Alas for missing AWP, given it was just a couple hours away, but I have other things on the go, and hours and dollars are finite. This year I plan to attend ICFA and NecronomiCon, both with my scholarly hat on (though I’m participating in a group reading at ICFA, and TBD about NecronomiCon). If things go as planned, I’ll also be participating in some group readings around Richmond this year. Details forthcoming.

Are you a writer? Do you aspire to make any money from your writing, but aren’t quite there yet? Read Scratch: Writers, Money, and the Art of Making a Living, edited by Manjula Martin. It’s new out this year, and it’s got some really good stuff in it about aspects of the writing life that often go publicly unaddressed, and about which many people are not well informed. All sorts of good essays and interviews in it, and worth its weight in gold for the blend of windows it offers into the life of the “full time writer.” In some regards it’s of a piece with Nick Mamatas’ Starve Better, which I’ve previously mentioned, and Jeff VanderMeer’s Booklife.