Several years ago, I was doing some archival research on the history of literary groups, associations, and the like in Richmond. At the time I was serving on the Board of Directors of James River Writers, the largest and most prominent literary organization in Central Virginia, and I’d gotten curious about where and how these groups preserve their histories. I didn’t expect to be personally attacked in the process, and yet—!

In the course of reading, I ran across a letter between two members of a bygone organization, talking about the value of different authors’ works. One said to the other that, in essence, people who publish academically are not real writers. An interesting claim, and one that makes more sense, given the letter was from many decades ago, back before creative writing put down… not merely roots, but taproots in the ivory tower.

To be fair, these correspondents weren’t discussing scholarship, much of which is just not created to be read for pleasure, with artistic goals in mind, or both. My publications over the last fifteen years have encompassed all of the above, though the last few years have seen a decrease in my fiction credits as I’ve turned my attention toward novels. For better or worse, that meant more careful allocation of my time, which led to less time reading and writing short fiction. It hasn’t, however, cut so much into my academic writing. Some of that’s professional stuff about my work as a librarian that is probably of no interest to most people reading this, but not entirely.

To wit, yesterday I got my (aforementioned) contributor’s copy of Fantastic Cities: American Urban Spaces in Science Fiction, Fantasy, and Horror. It includes my chapter “Olympia, Wilderness, and Consumption in Laird Barron’s Old Leech Cycle.” Viz:

This essay had a long gestation period, as is not uncommon in the humanities. I’m grateful to the editors that it’s out in the world, and I hope it finds readers! While I don’t have the same artistic ambitions with it that I do have with my fiction, I tried to write it well, and I tried to offer some perspectives that might be interesting to other readers of weird fiction, and Laird Barron’s fiction in particular.

Other than that? With March here, it seems like Omicron might be behind us, even if the world is unquiet. I’m still thinking about next steps on the novel I wrote about a couple posts back. In the meanwhile, I’m 10,000 words into a new novel, one that involved as detailed an outline as I’ve ever created, along with 25,000 words of preparatory character sketches. Sometimes new books need new methods, or so I’ve heard. Happy Spring!

As dedicated readers of Dark Stories, Hidden Roads may remember, I’ve occasionally shared statistics on publications, submissions, etc. 2021 was a low-stats year, to put it mildly. My only fiction publication was a 50-word story, up recently over at Do Some Damage as part of an RVA City Writers challenge.

While I have a few things out there in the slush piles, my writing attention is currently bent toward novels. both the aforementioned one and the one that’s currently splashed around my office on a bulletin board, in jotted fragments, and in dozens of research documents and PDFs. This is the most research-y thing I’ve written for a while, at least since “There Has Never Been Anyone Here” (2018). I can fudge a lot, I can invent a lot, and I can research as I go, but sometimes a story requires more before it can reasonably get off the ground. This is one of those, and so I’ve been reading about some byways of Virginia’s history, architectural and otherwise.

My academic publications last year technically included “The Masks of E’ch-Pi-El: Interpreting the Life and Work of H.P. Lovecraft,” in Lovecraft in the 21st Century, edited by Tony Alcala and Carl Sederholm and published last month, though I don’t think copies are hitting stores or shelves until this month. This month will see the publication of Fantastic Cities: American Urban Spaces in Science Fiction, Fantasy, and Horror, edited by Stefan Rabitsch, Michael Fuchs, and Stefan L. Brandt, containing my “Olympia, Wilderness, and Consumption in Laird Barron’s Old Leech Cycle.”

And with that, Happy New Year! May 2022 bring you peace, joy, respite. and triumphs.

One of the categories on this here blog that consistently gets attention, even after individual posts have fallen off most people’s radars, is “whenworldscollide.” That’s where I stick the stuff that lives in the Venn diagram of creative writing, scholarship, librarianship, and academic stuff. 2021’s been busy with that kind of stuff.

Early next year, my essay “Olympia, Wilderness, and Consumption in Laird Barron’s Old Leech Cycle” will be published in Fantastic Cities: American Urban Spaces in Science Fiction, Fantasy, and Horror. Likely not the rubric most people use for thinking about Old Leech, but it worked for me because I kept thinking about how very well Laird Barron does both Olympia and Washington, and also how little academics have yet written about either Barron or fiction set in Olympia. I probably wouldn’t have tried to write this piece back when I was first a librarian, trying to wall off different parts of my life and never really thinking about literary scholarship, but here we are.

Last week I moderated a lively discussion about the future of speculative fiction for James River Writers, the Central Virginia writing org on whose Board of Directors I served some years ago. Our conversation roamed over many topics, but I wound up juggling my writing hat and my library hat a bit, in particular on the question of genre labels and taxonomies. A tough issue that continues to get tougher as readers’ tastes solidify and specify. Many U.S. readers have no nearby bookstore they can happily browse, and many factors (not least the pandemic) have continued to drive book buyers to online sellers. In that environment, what a book is classified as can at times matter far more than it used to… to the reader, writer, publisher, OR library.

Finally, back in May I had the distinct (and new for me!) pleasure of serving as a keynote speaker at a symposium hosted by the University of Calgary, “Integrating Library, Archives and Special Collections into Creative Writing Pedagogy: An Experiential Symposium.” It was an honor and super-invigorating to present and help plan with the organizers and my fellow keynoter, David Pavelich. This event was some years in the making and had to be shifted online due to the pandemic, which put a damper on some facets and allowed for new ones, including broader attendance. None of it could have happened without the indefatigable efforts of my Canadian colleagues, Melanie Boyd, Aritha van Herk, and Jason Nisenson. Lots of great “whenworldscollide” moments here, but I have to say that it was a particular delight to talk about the research practices of various folks in horror and weird fiction.

The specter of looming death brings clarity to some things, confusion to others. I hope that you, reading this, are living with only the normal amounts of terror and insecurity, and that you have food, shelter, and access to medicine. Getting accurate, current information about much of anything is difficult right now, and clearly the rest of 2020 belongs to COVID-19.

The fatalities of this year are yet to be known, but I’m determined not to let my writing be among them, in so far as I can. Unlike many out there, including friends, I have a full time job — a double-edged sword for a writer, but one for which I’m so grateful at the moment. That I work in a library is an unmitigated pleasure and always has been, though our facilities are closed to the public at the moment to reduce virus transmission, and most of us are working from home.

In any event, so far this year I have two short stories set for publication. “The Touch of Lethe” is to be in an anthology that’s fairly soon to launch, and “The Haunted Object” is going to be in a magazine of various formats. I’m delighted about each in various ways, about which I’ll have more to say in due course.

This year has already seen the reprint of “The Doubtful Wonderland,” my story that originally appeared years ago in a now-defunct magazine of macabre neo-Victorian art and literature, The Willows. Editor Ben Thomas and his team got together to reprint the full run of the magazine via Kickstarter. If you’re interested in tales of the eerie and the occult, you can get electronic or print (hardcover or paperback) copies from https://willowsmagazine.com/.

If you’re stuck in quarantine and looking for something to read, you can, of course, read some of my fiction online. Also, though, let me point you at a thread I started on Twitter in March. I wrote it with my librarian hat on, and it’s all about what you can get from your library without leaving your house. The tweet did pretty well for a small-timer like me, mostly due to a kindly RT from Neil Gaiman, and it seemed to strike a chord with many people. Good luck, friends, and I hope you have or find something to read to keep you on an even keel in the weeks and months to come. Stay healthy. 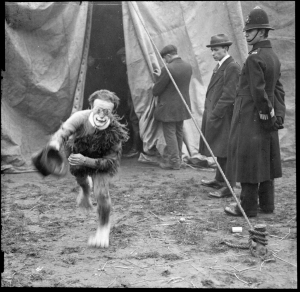 Courtesy of Tyne & Wear Archives & Museums, via The Commons at flickr

Has there been a more common post since the long, strange years of blogging’s heyday than “it’s been a long time since my last post?” Certainly not on this blog, dear readers. What are the haps, you ask? In quasi-brief…

My short story “Questionable Things” appeared in Synth #2 (as alluded to previously). It’s a SF story intimately tied to Blade Runner that I wrote some years ago. I shopped it around for quite some time, but it was a “bridesmaid” story, terminally getting “I loved it, but” rejections. I trunked it after playing Shadowrun Returns, on account of that game also involving SF, Seattle, and a serial killer (no spoilers, I hope, as all that’s clear from the first paragraph of my story).  Ultimately, I decided I liked it too much to let it go, polished it up, and C.M. Muller accepted it for his year-long project of publishing dark SF. (Vol. V of his excellent Nightscript series is available now.)

The novel I was working on last year collapsed under its own weight. I’d tried three different versions of it, two with substantially different plot points and an epistolary version  of one of those, but no dice. I got a short story out of it that I’m shopping around, but other than that, I’ve trunked it and moved on.

Other things outside of The Writing rose up and took over frequently this year. I’d like to say that I powered through and wrote every day during that time, but it ain’t so. Many’s the writer who talks about setting up your life around writing, and sticking to your guns despite all manner of personal difficulty, but I haven’t managed it. I am, however, working on a novel, a couple essays, etc., and I’m reading any number of good things — most recently Peter Clines’ The Fold. It’s old-school SF with enough contemporary goodness to feel fresh, and a few elements that I think might appeal to readers of this particular blog, heh-heh-heh…