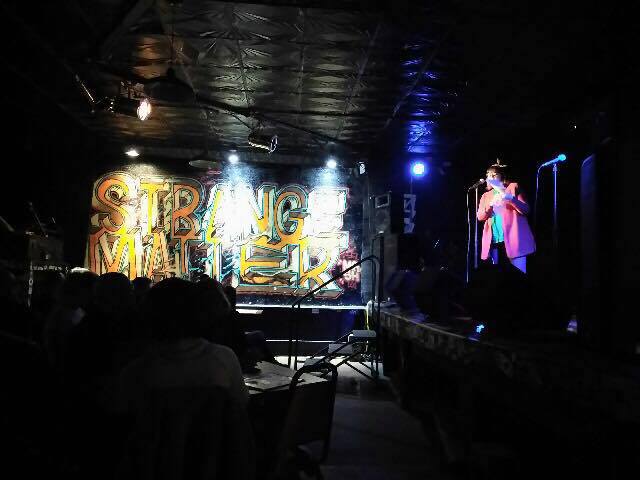 Last Friday I attended Love Trumps Hate: A Community Reading, held at Strange Matter here in Richmond. My ass-kicking friend and fellow writer Lindsay Chudzik made all the arrangements for and publicized this event, which was well attended and featured readings of poetry, fiction, and nonfiction. The works all explored “experiences with racism, homophobia, sexism, sexual assault, and xenophobia,” and we raised money for Safe Harbor and Health Brigade, a couple RVA orgs working to support sexual assault survivors and the LGBTQ+ community.

The event was electrifying, and there was a lot of courage on that stage. I read “Sufficient Pangs,” a piece of flash fiction I published several years ago and revised lightly for Friday. The story turned on a moment of sexism of the buddy-do-you-understand-what-you’re-saying variety, the kind that we all gotta step up and talk about in the moment. Thank you to my friends and colleagues who were able to make it out to hear everyone read, and to Lindsay for making it happen.

Despite living here as long as I have, it was my first time at Strange Matter. The crowd was a welcome blend of alt, art, college, and hip. Great staff and food, and I’m grateful they served as a venue for this event. Will I try a different combination of cheeses on my grilled cheese next time? Only time will tell.

The elephant in the post is, of course, why J.T. Glover, writer and reader of dark and weird fiction is all fired up about social justice. Friends, I don’t plan for this to become a political blog, but I’d be dishonest if I didn’t say I was horrified by the events of the past month. The election of Trump, the wave of hate crimes in the weeks following, and the country’s public surge to the right are more than troubling to me, and I think we have a hard road ahead. The modest efforts I previously made to support candidates, organizations, and initiatives that align with my beliefs… were not enough to prevent a truly terrible happening.

Even assuming Trump’s presidency and a complicit legislature don’t result in the actual destruction of the U.S. as we know it, or some sort of global conflict, I think there’s a solid chance that we’re about to enter a truly miserable period in American history. It’s still too early to be certain, but so far the next four years appear likely to include some combination of Gilded Age business practices, Red Scare-era propaganda, re-fighting the battles of the Civil Rights Era, and Cold War paranoia, plus greater general public tolerance for xenophobia, discrimination, and non-interventionism than we’ve seen for decades.

Life is always political, and it’s always been more political for marginalized groups than for straight, white, male, able-bodied, land-owning, etc. Americans. As such, if those latter traits apply to you, this is the time to use your power to speak out against the threats that lie ahead. We owe it to those who do not have our privilege to raise our voices.

And finally, if Love Trumps Hate sounds good to you, keep your antennae up. There was interest among attendees in doing it again, and I think we’re going to be seeing a lot more such events in the years to come.

One thought on “But What If It’s Life That’s Political?”