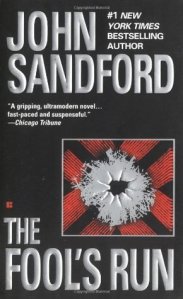 John Sandford is best known as the author of the Prey series of novels, which started in 1989. If you read thrillers, you’ve seen them at bookstores and libraries, generally titled [NOUN] of Prey, [ADJECTIVE] Prey, like that. The protagonist of the series is Lucas Davenport, a millionaire, poetry-writing, game-designing, karate-practicing, fashion plate of a ruggedly handsome and outdoorsy-but-cultured Minnesota cop. The series tracks along with his life as he fathers & adopts children, goes from quasi-playboy cop to family man troubleshooter for the state, and tracks down bad guys of all stripe, particularly serial killers.

The Prey novels each differ in their way, but they are formulaic. Though that word is usually an insult in writing circles, I use it as a complement here: Sandford figured out early on how to balance elements of plot, dialogue, character, local detail, humor, and violence to create a combination that always delivers. Literature isn’t science, but to date I have never, ever been disappointed by a Lucas Davenport novel. From lazy Sundays to airplane flights to busy times when I just want escape, these books have always done it for me. Some I’ve liked more than others, but I’ve disliked none.

All that said, Sandford is a pseudonym for John Camp, full time novelist these days and former journalist. Under his own name he’s published various things, and I recently read his The Fool’s Run, the first in a series of novels that also started in 1989 and is shorter (4) than the Prey series (24). For good reason. Folks, The Fool’s Run is so far over the top, I found myself giggling repeatedly when I started reading it. Eventually I was able to put that aside, but the protagonist is a tarot-reading computer hacker/veteran/painter who can shoot, do a little black bag job when needed, lives in Minnesota, and loves his fishing. His friends are artists, bartenders, cat burglars, journalists, etc. He is, to put it mildly, difficult to believe in, even among the verging-on-Übermenschen who populate so many bestsellers.

I like interesting, textured characters as well as the next reader, but the problem with Kidd is that he does a family of diverse things very well. I can easily imaging Sandford/Camp coming up with the character. Interviews and profiles suggest that he’s a pretty interesting cat, himself an artist and kareteka in addition to his work as an investigative journalist, which introduced him to more interesting things and people than most of us ever see. Role up bits of what he does, along with various people he’s met, put it all into one character, and you’ve got… Archimedes. Or Superman, or Ozymandius, but beyond belief.

The “beyond belief” part is what I found both interesting and irritating as I read. Kidd is interesting to read about, but he’s just not plausible as a human being. I have known people into everything Kidd does, and they all tend to travel in different circles; some overlap, but not all of them. So, why, then, did my annoyance fade as I kept reading? Reader, I submit it’s because Sandford/Camp knows his beats. He writes in such a way that I want to keep reading. He puts things together so clearly and tightly that he might as well be writing

At the end of the book? I’d enjoyed it. So, if you’re hankering to read about a tarot-reading, ass-kicking, computer hacker fisherman/artist, give it a try. For added kicks, it’s now a quarter-century old, and the technology makes for some pretty sweet reading. To wit, from p. 97 of the Kindle version:

“We steal their computers?”

“No, no. We just steal the information they keep on their computer disks.”

“I don’t know what that means.”

“A computer disk is like magnetic recording tape, except that it’s flat, like a phonograph record. The information is stored on the disk in the form of magnetic markers. When we play the disk into the computer, the computer translates the markers into letters and puts them on the screen.”