Past a certain threshold of popularity, artists, musicians, writers, and other creators leave obscurity and enter the zone of public judgment. While it’s not quite celebrity, there are parallels, and whatever rules of decorum and reticence come into play with new or minor artists tend to wane. Fandoms emerge, worship and denigration blossom, stalkers slowly emerge (or not) from the woodwork, and online commentary metastasizes and sprouts hairy tendrils. 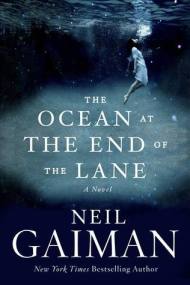 The Ocean at the End of the Lane, by Neil Gaiman

Such is the case with authors on the scale of Neil Gaiman. His new book, The Ocean at the End of the Lane, is a wistful morsel of delight. Perhaps not to everyone’s taste, to judge by some of the 1800+ Amazon reviews, but certainly to mine. The incantatory tone of the opening is as clear a call to rich veins of myth and Story as you’ll read this year. The plot and characters are somewhat familiar types, if you’ve read his work before, but so it is with things mythological or Jungian. On finishing it, I felt a sense of readerly satisfaction at hearing a tale well told.

My reaction as a writer was rather different. Now, I’ve written previously about my deep affection for Gaiman’s work, particularly Sandman, but also American Gods, Coraline, et al., back to Don’t Panic. It’s not hard to like Neil Gaiman, and his thoroughgoing presence in the worlds of F/SF/H and comics has long since passed into a richly deserved and truly broad-based popularity.

Even while reading The Ocean at the End of the Lane, though, I couldn’t help but remember the dozens of pot-shots I’ve heard or read taken at the man, the bulk from other writers. The green-eyed monster has a share in this, to be sure. Gaiman is beloved, well-remunerated, has actually influenced the culture, is a topic of continued popular, genre, and scholarly interest, and by all reports is also an exceedingly decent human being. And yet, whenever the topic of him or his fiction arises in discussion with other writers, the knives come out. Critical judgment, or personal preference is one thing, but I can hardly remember being party to a discussion of Gaiman’s work with other writers that has not incorporated at least a token amount of insecure posturing.

To digress, I recently made a minor decision about my grammatical comportment. Thenceforth, I decided, I’d happily reply to such inquiries as “How are you today?” with either “good” or “well” as the mood took me. I’ve passed some sort of personal Rubicon, perhaps due to aging, that means I’d rather be disliked for my preferences than liked for toeing the linguistic/Party line. Since then I’ve been on the receiving end of more sour looks than one would think a predilection for the popular, if improper, response could elicit.

When it comes to Neil Gaiman’s work, I’ve never denied, or even tacitly omitted, my regard, but here is the thing (news flash!): on some level, witting or unwitting, the Mandarins of writing do not much like popularity. From collapsed backlists to Barnes & Noble death-spirals to almost intentionally unprofitable academic fiction, the landscape for writing fiction ain’t what it used to be. Self-publishing, e-books, the Web, etc. have all brought new freedoms, but also new problems, and making a buck as a writer of fiction is tough stuff these days. Seeing the success of anyone else, let alone a cheerful-seeming fellow like Gaiman, well…

This isn’t a review, obviously, but still: go read The Ocean at the End of the Lane. Read it because it’s a delight and will make you grin. You’ll hear about others reading it, and you’ll hear the eye-rolling from the jaded corners of coffee shops, but that’s all right. If its author’s literary reception is hindered in any quarters by popular success, I doubt he will much mind, nor should he. It’s a good book that deserves to be read, and I’m glad I had the pleasure.

4 thoughts on “On Liking Popular Things”